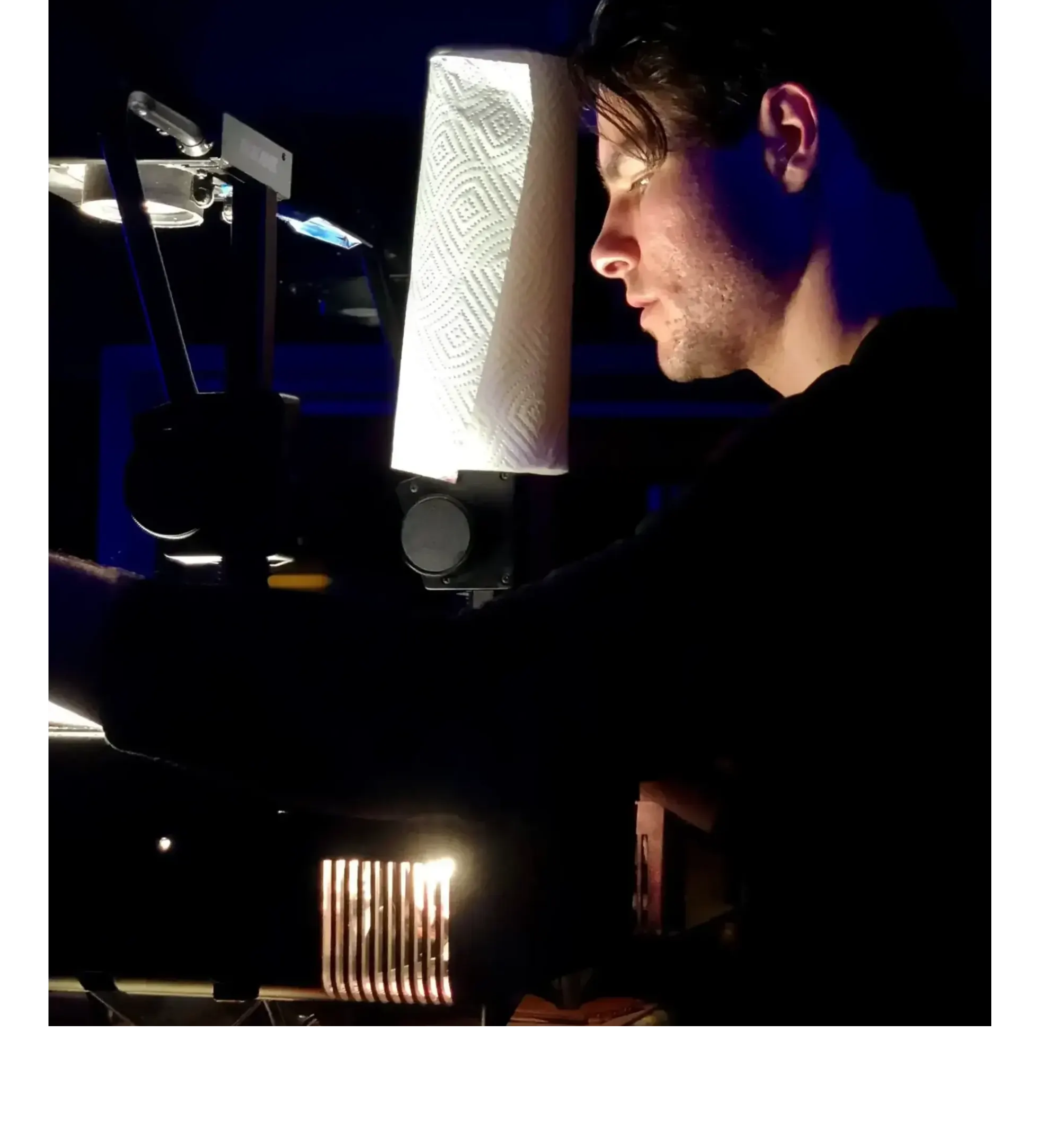 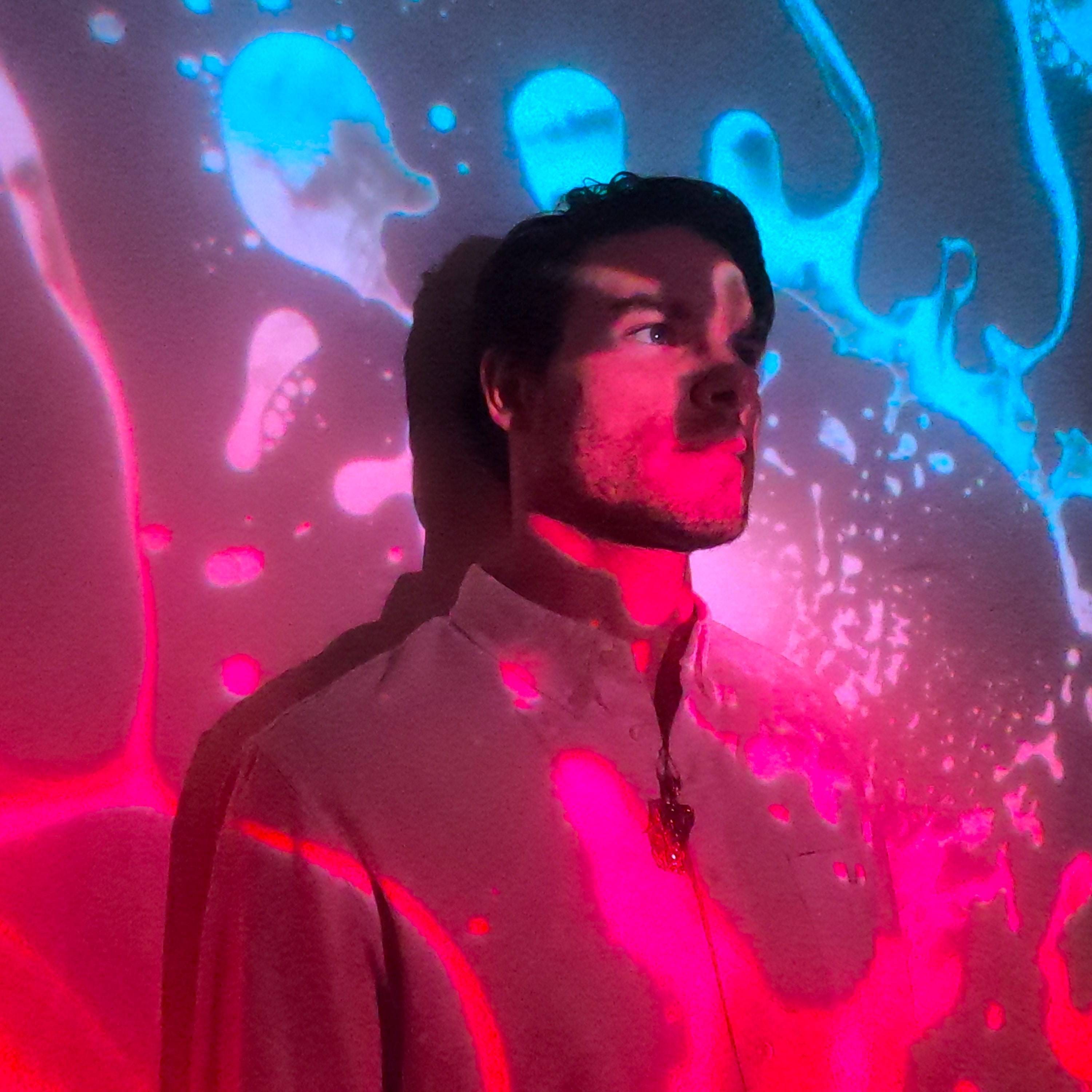 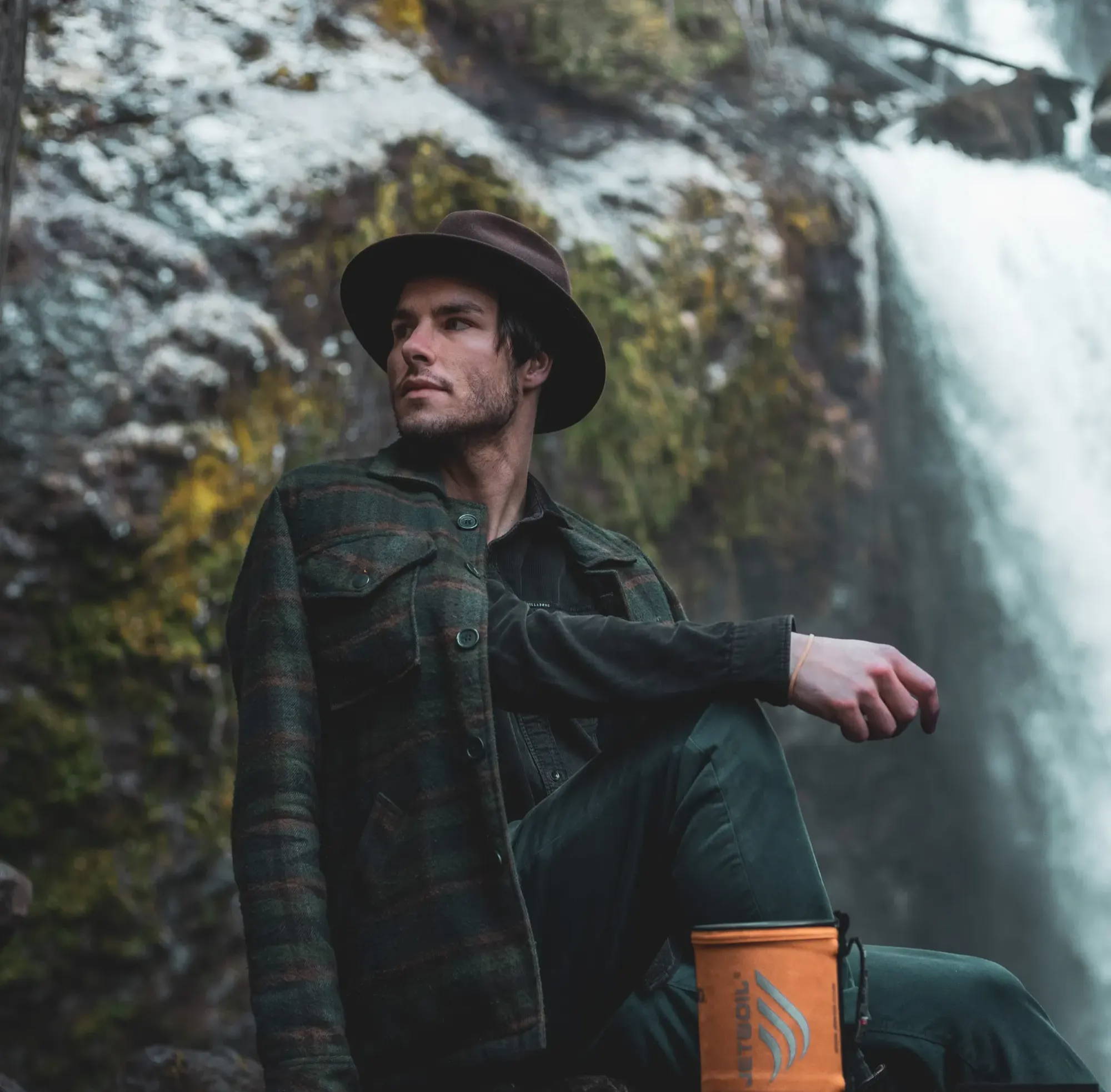 It is chemistry meets art meets engineering. At its simplest, it’s a color emulsion of moving liquid light.

It’s not new. It was born out of necessity in the late 50’s. Dark theaters, lit only with lamps lacked the color necessary to light the stage. Projectors with colored transparencies were introduced to add light, dimension, and mood. Once pioneered, it got huge, eventually seeping into San Francisco’s summer of love in the late sixties and became standard in Grateful Dead’s tours.

Probably not, but that is because liquid light art has broken its boundaries and oozed out into society.

Aidan started doing light shows in Portland, Oregon in 2018, but art was always a part of his life. His mother saw it in him from an early age and put him in art school. She watched him do things differently than other kids and she knew his craving for authenticity would need to be expressed through art. His foundation was in traditional art – painting and sculpture – but he found his niche in liquid lightshows.

He was first introduced to the art form at Desert Daze – a fringe, underground music festival with bands from all over the world that paired with psychedelic visual artists. (Sounds amazing…let’s not tell the celebrities about it.)

Only those lucky and old enough, remember the old school projectors used back in the day.

Aidan’s projector is his “bread and butter” – his live tool that is at the heart of his work. You may be picturing the industrial carts they sat on, the whir of the fan, and the snap of the transparencies as they were switched out and layered over one another.

But this is much cooler. The liquid light shows emitting from the projector are paired with live music.

On his projector he mixes oil, water, and alcohol in bowls creating an emulsion. The dyes he chooses create the beautiful colors and he injects movement into the patterns all in cadence with the music as the projector’s mirrors and light flood the venue and crowd with beautiful, colored, moving light.

And it’s all improv.

He doesn’t meet with the band or listen to their set list beforehand. With his background in music, it’s easy for him to pick up tempo or key changes. Whatever he feels in that movement, he does, and he invites an entire audience to be in the moment with him and the music.

The audience, the band, Aidan – they all see the color in real time. There is nothing digital – it’s all analog as he maintains the integrity of the 60’s art form.

For Aidan, it’s an escape. He often feels cathartic, meditative and when a show wraps up it feels deeply satisfying in a way other activities cannot fulfill.

His aspirations for audience members is to come away with a sense of wonder. When people tap into wonderment, they’re more curious and innovative. When they experience a synesthesia of all senses colliding, their perceptions are altered.

Aidan does shows on weekends but also spends time in his studio creating. While his shows are full of improv, his studio work is a bit more methodical.

The art is all about polarity and surface tension – breaking up water molecules and creating reactions with various additives. Each time he breaks up the composition with movement, air, or by adding another chemical, the tension is broken, and the art is transformed. It has required significant patience and practice over the years.

Once the composition is in a proper place for him, he captures a few images in high resolution by carefully configuring the lens exposure and camera settings to shoot over light. Nevertheless, 80% of his work doesn’t make the final cut. In fact, those that do pass his keen eye include key factors such as saturation levels, brightness, how the hues contrast, and sharpness

When asked about putting his art onto SoulFine glass. Aidan replied, “It is a special thing to have my art originate on glass and then finalize on high grade glass. It maintains the integrity of the artform in my opinion and shows that this art form can come full circle.”

LIMITED TIME ONLY SAVE 30%

PLUS AN ADDITIONAL 10% OFF WHEN YOU USE CODE: SOULEXCITED